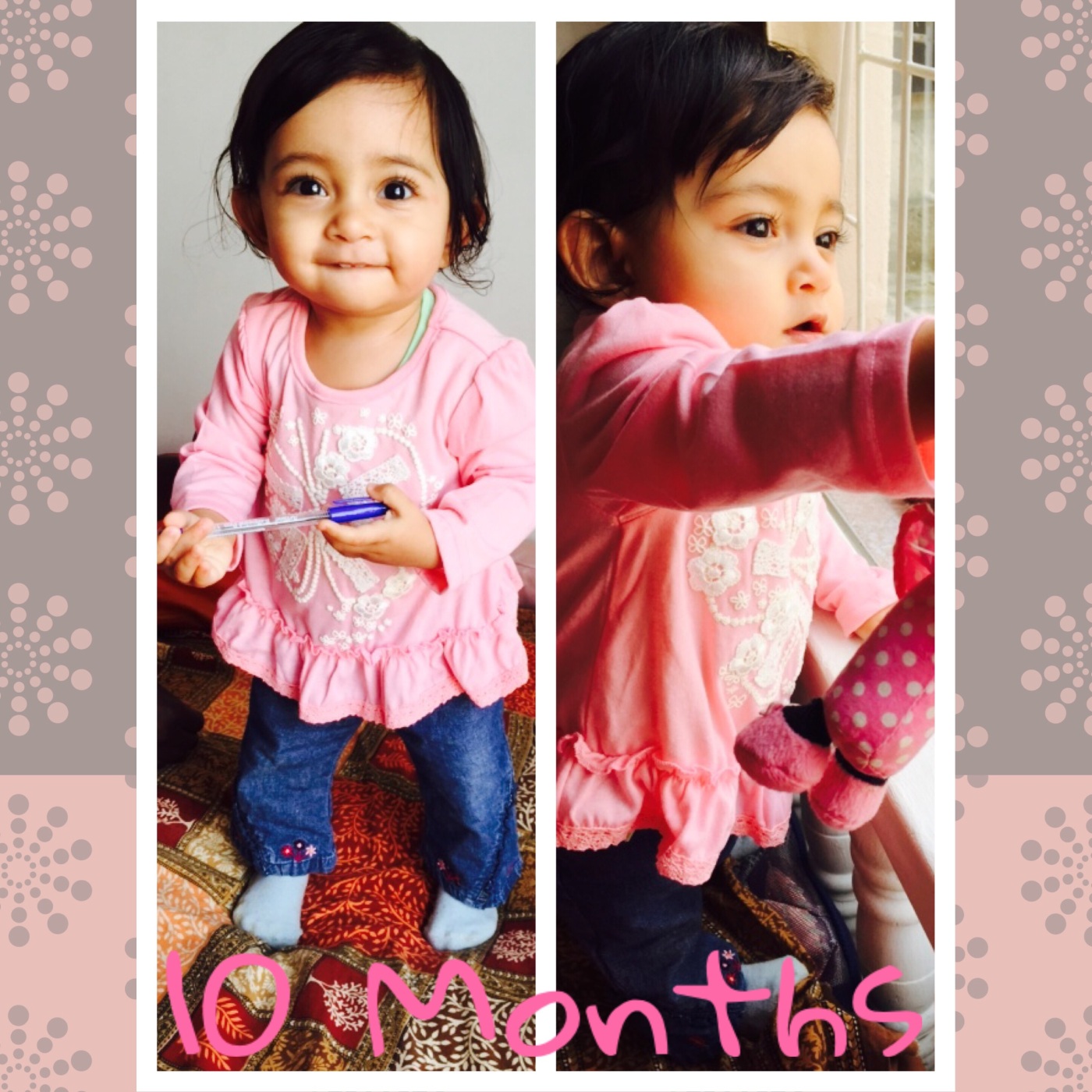 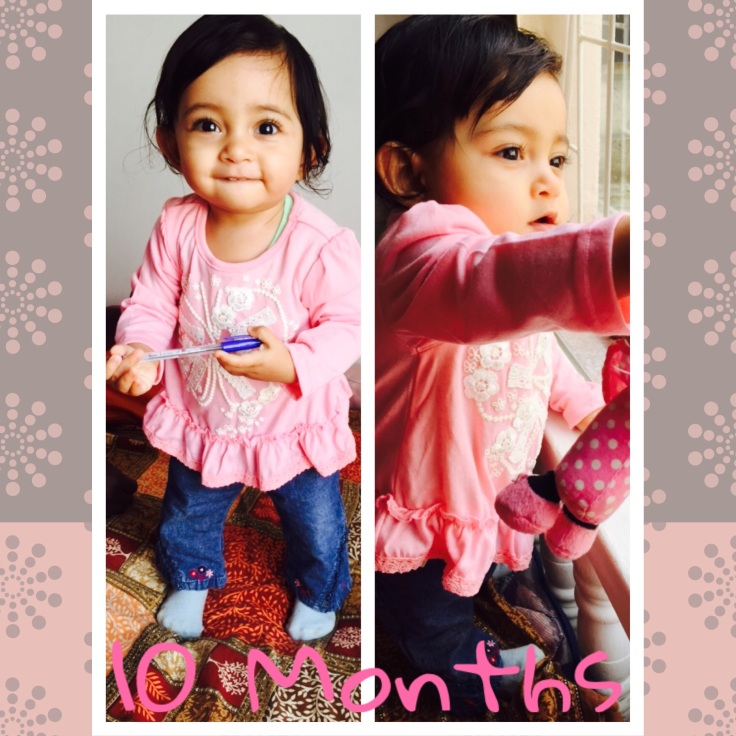 Gini’s first birthday is inching closer faster than I had ever imagined it would. I haven’t started preparing for it yet and at the rate that time is moving, I better start or it will be too late too soon.

More on that later. For now, here is a little update on what my increasingly mobile 10 month old baby can do now.

* As is customary with her, Gini’s weight is below the median line while her height is above it. Gini needs 12-18m clothes for pants and 9-12m for the tops. She now wears size 4 nappies.

* Gini has been pulling herself up to standing for quite sometime now. This month, she has learnt to let go off whatever she is holding on to and balance on her own. However the biggest achievement this month has been her walking. Yes, Gini has taken a few unassisted, wobbly steps forward! As the month has progressed, her balance has improved. Now, she is happy to cruise around if someone is in the same room as her.

* One often neglected, rather painful but equally important milestone that Gini mastered is the pincer grasp. As a result, I get pinched hard throughout the day and often at night too. 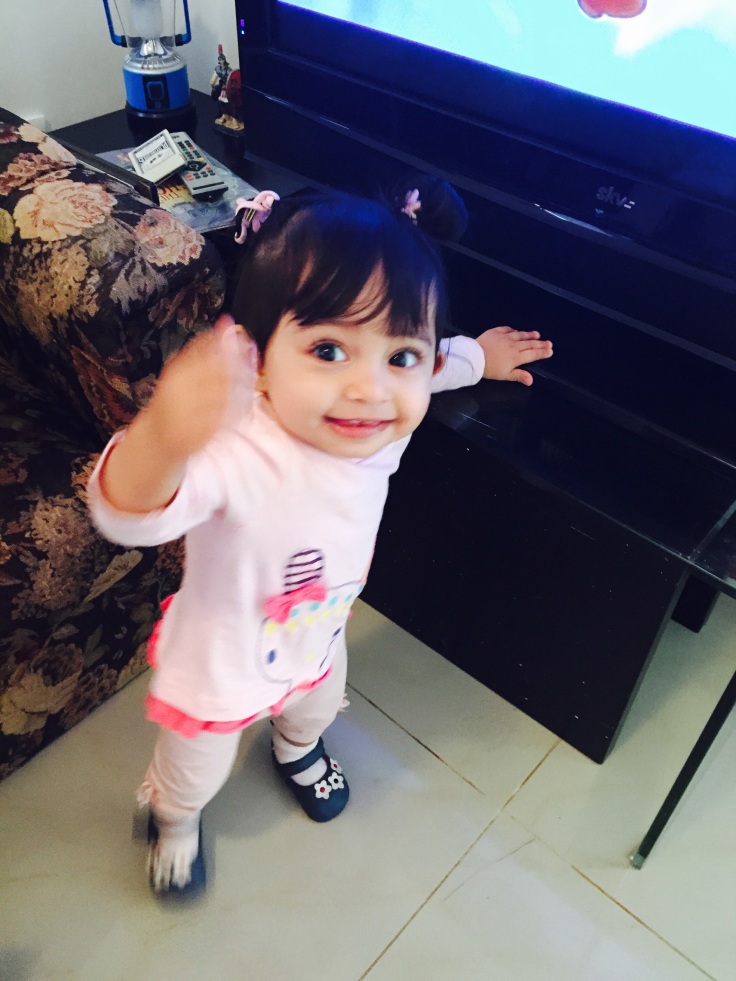 * Gini recognizes a lot of different words like chair, T.V, fridge, car etc. She even points to them. She also responds when asked to clap her hands, though only if she is in a playful mood.

* Gini knows most of her toys by name and reaches for the right one when asked to get it. She loves taking out things from boxes, fresh diapers from the packet, toys from their stand etc. She loves interactive, pop-up books. So far, she has enjoyed Grandma, Where are You? and Maisy Goes to Play School. 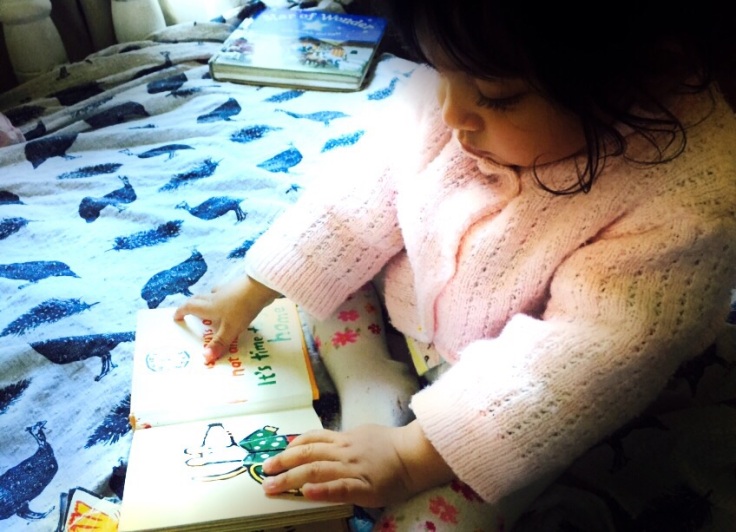 * Gini loves nursery rhymes. She looks at me with rapt attention and often smiles and claps in delight when I sing them for her. Her current favourite is Old Mac Donald, thanks to the animal noises and silly faces that mummy makes! She anticipates tickles when I say ‘And one little piggy cried wee wee wee’ and breaks into a wide smile.

* She loves watching cartoons on Disney Junior and JimJam. Her favourite shows are Goldie & Bear, Miles from Tomorow, Sophia the First, Guess How Much I Love You, Barney and Friends, and Chirp.

* Gini is still taking 2 naps during the day, each an hour long, and sleeping for 10-11 hours at night. She doesn’t sleep through the night regularly, unfortunately, though we have had a few nights where she hasn’t stirred at all till the break of dawn. 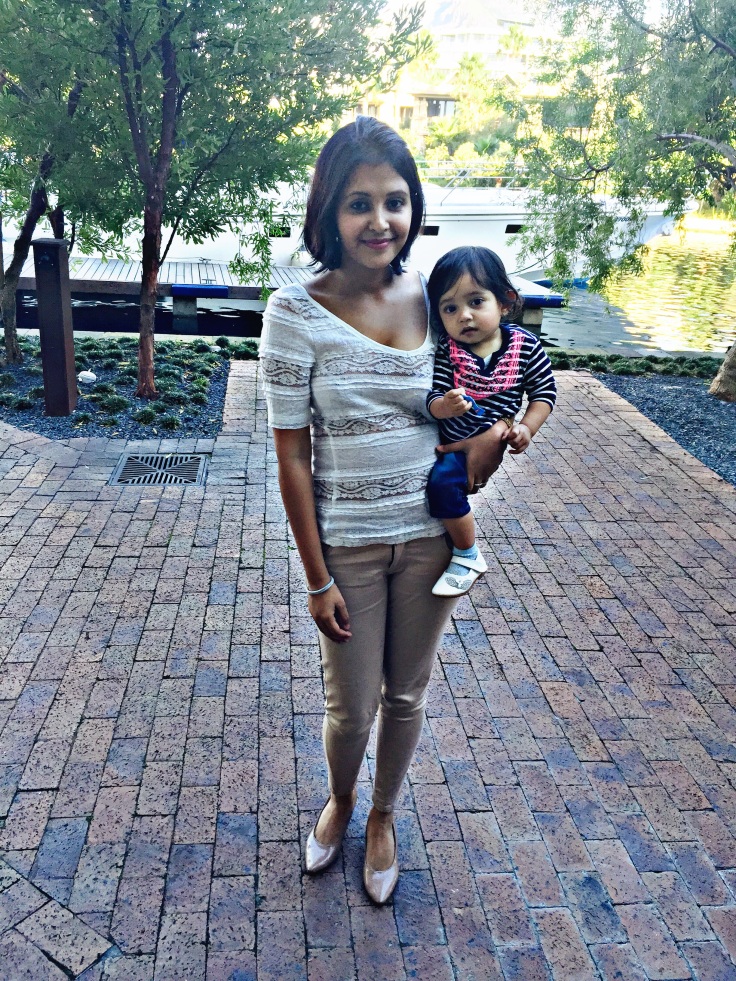 * Gini has 4-5 nursing sessions and 3 solid meals during the day. I can’t seem to find anytime for snacks. I am hoping to whittle her nursing down to 3 a day and add a finger-food snack to the routine soon.

This is all that I can think of now. This month has been pretty eventful and I can’t wait to see what new things she comes up with next month. 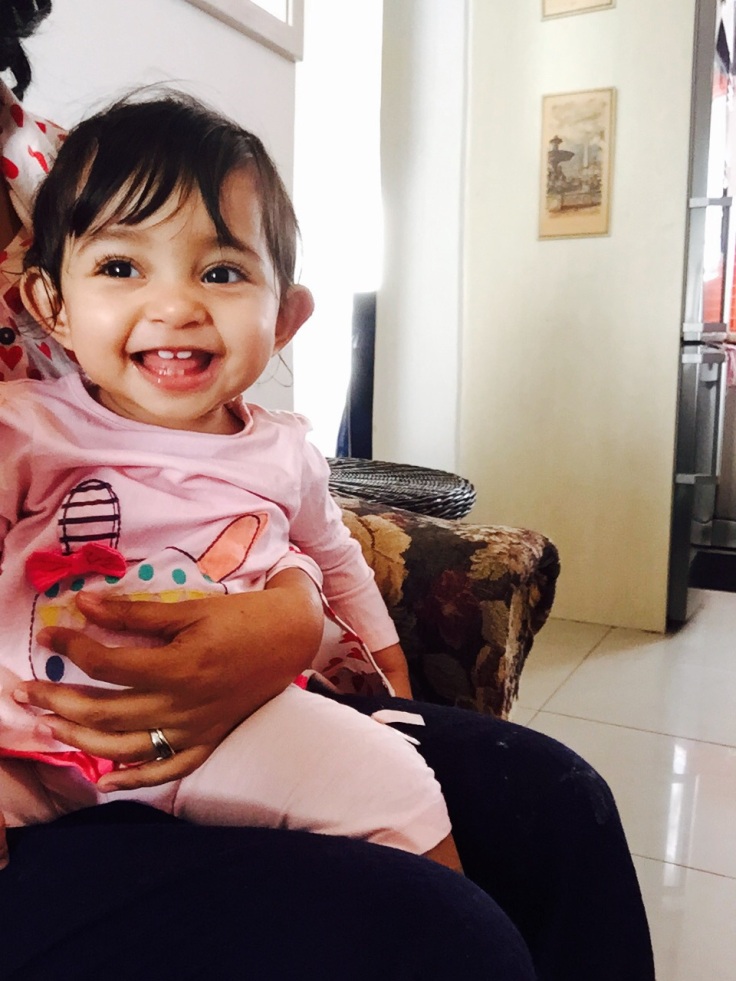